A brief guide to a very long walk.............a spectacular 1000 km walk, the Vía de la Plata is an ancient pilgrimage route from Sevilla, Andalusia in southern Spain to Santiago de Compostela, Galicia in northwest Spain, the longest of the Camino de Santiago pilgrimage routes in Spain. It passes within 10kms of Finca al-manzil at the village of Alcuescar. 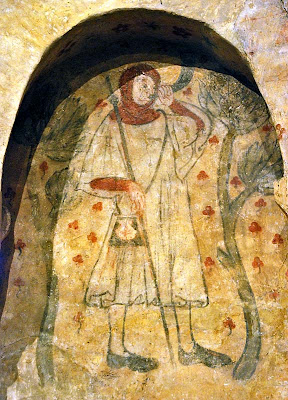 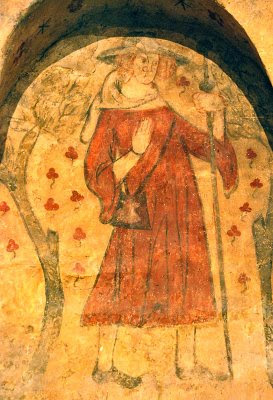 medieval pilgrims with emblemic scallop shell on hat and bag

This particular Camino de Santiago is one of the many routes that converge on the cathedral of Santiago de Compostela, it is a more varied trip than the popular Camino Francés, passing through stunning landscapes and cultural treasures. Unlike the busy northern route, just 2000 or so pilgrims make the trip each year, it’s a tougher, more isolated trip with fewer facilities and less of a pilgrim infrastructure.See http://www.santiago-compostela.net/ for a complete guide to the Santiago legend and various routes.
Also http://www.pilgrimage-to-santiago.com/board/camino-mozarabe-and-via-de-la-plata/topic1404.html for some frank comments about the practicalities of walking every day for 50 days. 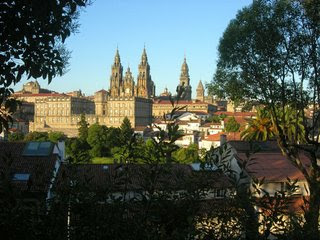 Santiago de Compostela is believed to be one of the world's holy places and the third most holy in Christendom. The pilgrimage ends in the cathedral where a silver casket is said to contain the remains of the Apostle Saint James. 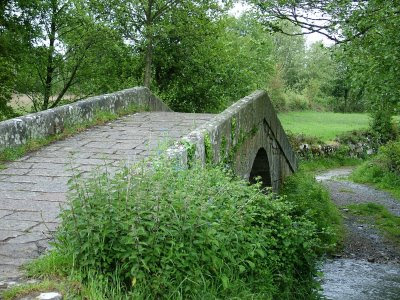 There are places along the Camino where you might believe you were walking not only across space, but across time as well. Roman walls and medieval bridges still stand; old roads and churches remain in villages untouched by the centuries. 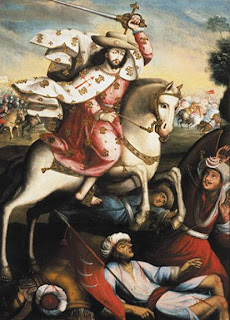 THE LEGEND OF SANTIAGO Saint James preached on the Iberian Peninsula in the years after Jesus’ death, returned to Jerusalem where he was beheaded and then somehow a boat with his remains landed in Spain, where the remains were retrieved and buried in Compostela. Centuries passed before the remains were miraculously rediscovered. Many now believe that the remains are not those of St. James at all. But the legend, and the camino, continue.

It was the powerful mystique of Santiago that was invoked during the Christian re-conquest in the 13th century, hence his sobiquet , Santiago Matamouros, St. James the Moor slayer. As a direct result of the Christian victories the powerful Ordem de Santiago spread its influence far and wide.
Walking a pilgrimage route is a very old endeavor. The pilgrimage to Santiago had started by the 9th century, and by the 13th century, an estimated half-million people walked to Santiago each year. Many famous persons made the pilgrimage: El Cid, Louis VII of France, St. Francis of Assisi, Queen Isabella & King Ferdinand.
Medieval towns were established and thrived on the pilgrims' progress, creating many facilities for travellers; lodgings, hospices, inns, souvenir vendors and many places of prayer, beautiful churches & chapels.
In 2006, over 100,000 pilgrims received the special pilgrimage certificate in Compostela. 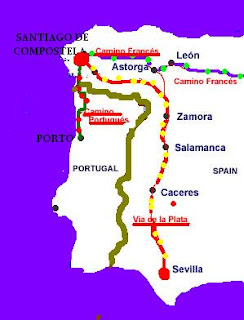 The route begins in Sevilla, Andalusia, a splendid city where one can enjoy flamenco, superb food and Moorish architecture. Avoid the searing heat of the summer by starting in spring or autumn, still plenty of sun and a good temperature for walking through the cork oaks forests and vineyards of Andalucía.
On leaving the cathedral in Sevilla follow the Vía de la Plata’s yellow arrows across the Río
Guadalquivir into the working class barrio of Triana, traditionally an area of ceramics, bullfighters and flamenco…….the inspiration for Carmen’s tobacco factory still exists here.
Some 10 km outside the city is Italica, a ruined city with some of the best Roman remains in Andalucía, including some spectacular mosaics. The first night is spent in the small town of Guillena; like much of the accommodation along the Vía de la Plata, Guillena’s albergue (pilgrim hostel) is just floor space in the local sports centre, although there is also a small hotel in town.

The next few days are spent walking through undulating countryside and farmland. Although the region’s holm and cork oaks provide some shade the route is often in the open, make sure to carry plenty of water if the weather is hot. 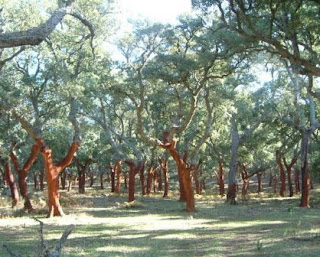 Castilblanco de Arroyos, 19 km from Guillena, is a beautiful hillside town with cobbled streets, whitewashed terraced houses, and a modern albergue. The next day walk through a landscape of scrub dotted with the occasional holm oak and eventually arrive at Almadén de la Plata, a tiny town in the Sierra Morena centred on a distinctive, square Torre de Reloj
El Real de la Jara, 17 km further on via undulating farmland, the last town in Andalucía, doesn’t have an albergue, although there are some rooms available in the village.
Soon Andalucía is left behind, one enters Extremadura through a vast flat and sparsely populated stretch. In autumn the walk will be alongside vines heavy with fruit and fields of grazing cerdos ibéricos, Extremadura’s famous pigs. There are a lot of these pigs around Monesterio, the first sizeable town since Sevilla, the region is famous for its choriços and jamons from the acorn fed pigs. After passing through Fuente de Cantos, Zafra, and Villafranca de los Barros, the Vía de la Plata enters the Tierra de Barros, a red clay area which is a rich agricultural region famous for its olives and wine production.
Further north is Mérida, a lovely, lively town with fabulous Roman remains on the Guadiana river, well worth a longer stay. From Merida the route intermittently follows the Roman road that once led all the way to Astorga, the camino is marked by modern and ancient miliarios (milestones). A day further on is the Parque Natural de Cornalvo a vast area which is a delight in spring with a tapestry of wild flowers, also home to amphibians rarely seen outside the area, such as the European pond terrapin and the Iberian midwife toad. It’s also a great place to see birds, and the park is home to nesting black storks and black-shouldered kites. 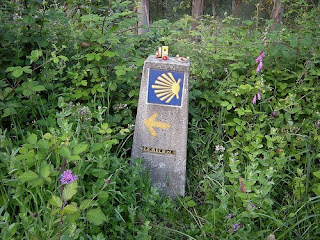 On the next part of the journey the Vía de la Plata passes through Alcuescar, 10kms from Finca al-manzil http://www.finca-al-manzil.com/

Maybe take a day off with a comfortable base for exploration from the finca. The Sierra de Montanchez is beautiful area with wonderful bird life and some rare wild flowers, especially orchids. The small mountain town of Montanchez is another famed place for the delicious iberic jamon, it is possible to visit the jamon producers and sample the local cheese and jamon as tapas in any of the local bodegas. It is also possible to order dinner at the finca.

The landscape changes into rolling plains as one approaches Cáceres . The route follows the old road now replaced by an autovia which means the old road is almost deserted, perfect for peaceful walking. There are some interesting 16th century fortified country houses on the way, the storks have built their untidy nests on the old battlements and towers. The city of Caceres has a marvellous casco viejo (walled town) it is well worth a visit, plenty of economic pensiones around the plaza major.
From Caceres the route runs straight through to Salamanca crossing the Tajo and the huge reservoir sytem where one can see the remains of a Roman bridge. A few days along at Galisteo there is some welcome green landscape thanks to the area’s extensive network of irrigation canals. On leaving the Extremadura basin behind the Sierra de la Candelaria comes into view.
The Vía de la Plata leaves the spa town of Baños de Montemayor to climb the Sierra de Béjar, rolling hills more in character with Galicia with a damp microclimate, oaks and ferns. The dampness soon ends as one enters the meseta, a vast, high tableland that covers much of central Spain. Summers are hot, Winters are cold and there can be a bone-chilling wind from Autumn to Spring. Look out for kestrels, peregrine falcons, Egyptian vultures, and other birds of prey. Closer to the ground there is the melodic song of the meseta’s many larks. There are Great Bustards in this area especially in the spring.
Be sure to rest in Salamanca, an ancient university town with stunning golden sandstone buildings and a magnificent plaza mayor. From here, it’s a couple of days through farmland and woodland to Zamora, a wonderful town full of Romanesque monuments. Zamora is the last of the grand cities on the way, from here on the stays are in tiny rural communities, some so small they can scarcely be called villages. It gets greener and hillier from now on as one approaches the province of Galicia. 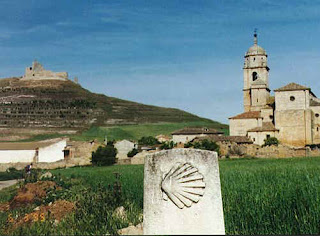 Climbing the foothills of the Cordillera Cantábrica one is soon faced with some of the steepest climbs of the journey. The route begins to follow old stone paths rather than broad dirt tracks, often shaded by oaks and slick with rain. The climate can be harsh, with high winds and rainstorms, but on the occasions when the weather’s good enough for panoramic views, you’ll see wave upon wave of rippling, barren mountains sliced by steep valleys. The hardy souls that live in the mountain villages provide pilgrims with a fabulous welcome, and the residents of Laza, the main town you’ll pass through, celebrate Carnival with an outrageous festival renowned throughout the country.
Once over the mountains and into Galicia it’s a winding route through tiny farms and one-house hamlets, alongside rain-drenched fields and rivers. Much of the time one passes through lush oak forests, rich with ferns, foxgloves, moss and lichen. The only sizeable place to pass through is Ourense otherwise one experiences rural Galicia at its finest, from the wonderful bread at Cea to the eerie isolated Monasterio de Oseira where pilgrims can stay the night.
From the monastery the surroundings gradually become less rural until arrival at Santiago de Compostela approaching the city along a much quieter route than that of the Camino Francés. At last after 1000 kms and 50 days of life on the camino, one can relax and explore this hallowed city with its legendary cathedral and many other interesting monuments. There are comfortable places to stay as well as the pilgrim accommodation where there is certainly a great atmosphere of camaraderie and shared elation on meeting the challenge and arriving safely at the end of ones pilgrimage. The city is also famed for the quality of the restaurants, especially those offering the wonderfully fresh seafood from the Galician coast, not surprisingly scallop shells abound……….the ancient symbol of this pilgrimage, from South coast to North coast and all the beautiful scenery in between.
Posted by extremadura and beyond