A walk to commemorate the Battle of Arroyomolinos 28th October 1811 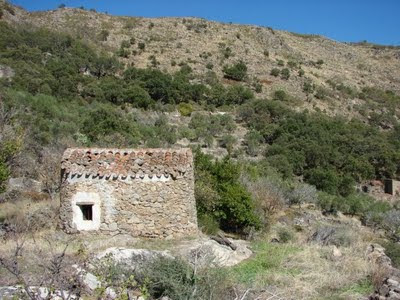 Today is the 198th anniversary of the battle of Arroyomolinos which was fought in the morning of 28th October 1811 during a wild storm. Fortunately for us the weather was perfect this morning, sunny and warm and not a desperate French hussar in sight as we set off for the walk which follows the path taken by Spanish guerrilla fighters hoping to cut off the retreat of General Girard and what was left of his force after the total rout of the battle. In fact they were not successful and General Girard although wounded managed to escape over a low saddle in the sierra, with him were a mere 400 troops out of his original force of 3000. He left behind a scene of confusion and disaster, many French troops in desperate panic tried to escape directly up the impossibly steep slopes of the sierra disgarding their horses and armour on the way, they were either swiftly dispatched by the guerrillas or rounded up by the British force under General Hill and captured as prisoners of war to be sent back via Lisbon to the specially built prisons in England for the duration of the war. 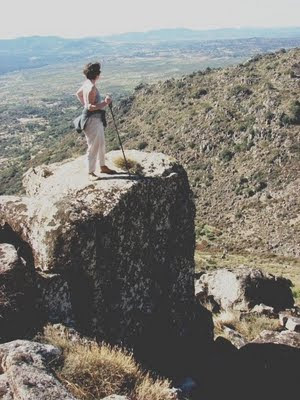 General Girard must surely have been in deepest despondency that morning. The day had started badly for him. His breakfast was rudely interrupted by the sudden and totally unexpected attack on Arroyomolinos heralded by the 71st Highlanders charging pell mell and shouting their rousing rendition of the old Jacobite air "Johnny Cope, are ye rising yet?"
The fighting was fierce and bloody with close combat over the walls of the village gardens and several cavalry charges. The brilliant tactics of General Hill left no road out of the village uncovered. The French were in a trap with no way to go except due east: to the north was the Sierra de Montanchez, a long chain of steep hills while to the west and the south were the British on the exits to Merida and Trujillo. By moving quickly and abandoning all their wagons, horses, cannons and armour the French nearly escaped when their column was hit by the lead units of Wilson's Brigade (the light companies of the 1/28th, 1/34th, and the 1/39th Regiments) coming from the south. The three companies hit the first battalion in the flank and succeeded in slowing down the rest of the column until the rest of the British and Portuguese could come up. Girard, seeing there was no escape, ordered his men not to stop and fight, but to attempt to move cross-country and to climb the high hills. He and about 400 men succeeded by scrambling over the only low part of the sierra, however the rest of the column was penned in and forced to lay down their arms. The battle was lost ingloriously and the French loses were horrendous. Of the six infantry battalions and three cavalry regiments engaged, about 1,000 men were killed or wounded. In addition to these casualties, another 1300 men and 30 officers were made prisoners. Most of the casualties were among the infantry, who lost about 80% of their combatents. Additionally, General Bron, the commander of the Cavalry, the Prince of Aremberg, commander of the 27th Chasseurs, and Colonel André, the chief-of-staff of the 5th Corps were all taken as prisoners. Girard lost all his baggage, guns, 6 caissons of ammunition, and the 5,000 dollars tax levied on the town of Caceres. British losses were less than 80 men killed and wounded. General Girard was subsequently relieved by Marshal Soult and returned to France in disgrace. 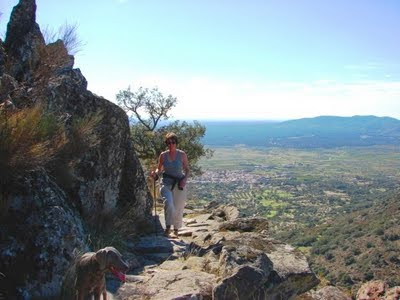 As you can see the path winds its way high up on the slopes of the sierra with amazing views down on to the flat plains of olive groves, on that long ago morning probably still shrouded with the heavy mist that decended after the storm, at least blotting out the carnage below. We walked to the point where the guerrillas must have been able to observe Girard's desperate band disappearing over the low dip in the sierra, they assumed that they would be stopped by a convoy on the road below but in fact this did not happen and the survivors must have had a desperate few days until they could join up with the French forces of Druet several days later.
We turned back and took another path that leads along a track high above the watermill gorge of arroyomolinos with wonderful views down on to the mills rather than the usual route of walking past them. We came out above the path that leads to Montanchez where there are several more mills and a stand of enormous chestnut trees which may have been slender saplings 198 years ago.
From this point we then took the usual route down the gorge back to Arroyomolinos. The river was running in some parts and looked quite clean and clear, it must have been quite different on that fateful day. Many of the French must have tried to escape up the gorge, maybe trying to take shelter in the mills but they didn't get far before they were overtaken by the merciless guerrillas and barbarously slaughtered, the river ran red that day. 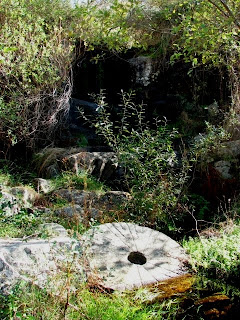 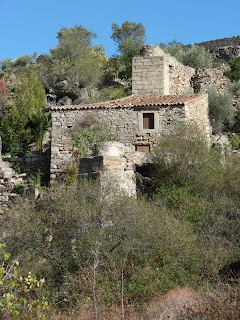 Email ThisBlogThis!Share to TwitterShare to FacebookShare to Pinterest
Labels: Arroyomolinos, Walking Through the Centuries