A Short trip to a very small Monastery 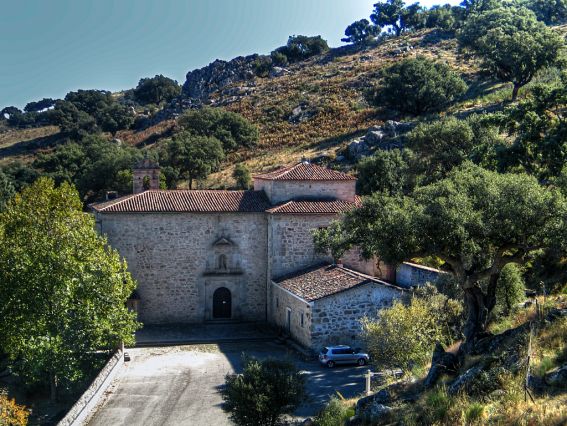 It's getting chilly so our long walks tend to be transformed into a drive in the car and a short walk with some central point of interest and a few things to see along the way. Last weekend it was a trip to Ciudad Rodrigo, about 180kms from Montanchez nearly on the border with Portugal. Yet another siege and battle scene from the Peninsula wars, famed for its extensive and complete defensive wall encircling the whole town. After turning off the autovia de la plata at Canaveral we headed west towards Portugal. We have been this way several times on the way to the pottery at Torrejoncillo where we bought our large clay oven. This time we took a little detour at the sign for Monasterio de Palancar. A pretty rural camino wound through green fields to the village of Palancar tucked away in a fold of the hills. Just a little outside the village is the monastery built on a hill with wide views down to the valley. I had read that this was the smallest monastery in the world..........depends what constitutes a monastery I suppose, it certainly didn't look small from the outside but apparently this first view is mostly the "iglesia nueva" which was built 300 years after the first foundation in 1557 . We had time to look around the charming damp garden before one of the designated times of entry, quite a gruff warning not to ring the bell at any other times.  The door creaked open at 12.15 to reveal a small bent figure in the brown habit of the Franciscan order, this was brother Basilico who seemed to be quite alert if not agile considering his 86 years. 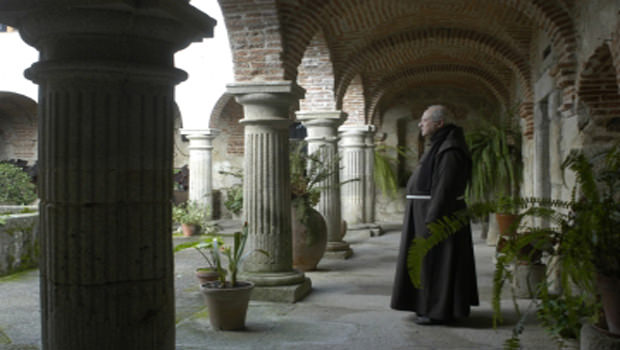 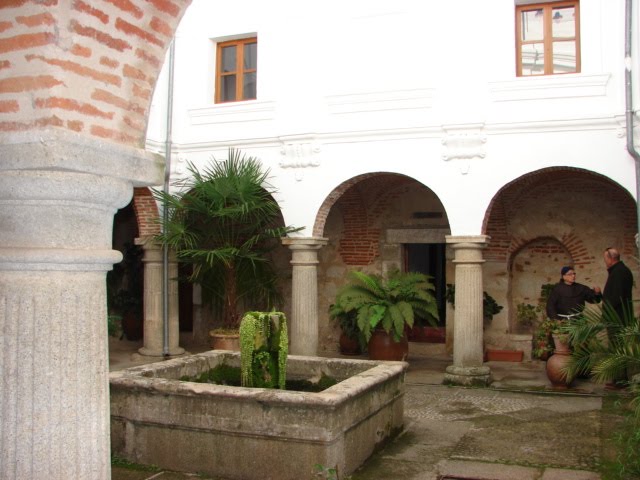 He gave us the tour and a fluent spiel about the quirks and curiosities of the place. From the iglesia nuevo built in the 18th century with a soaring vaulted ceiling of exposed bricks and plain whitewashed walls we walked through a passage way to the attractive cloisters built in the 19th century, a courtyard with pots of ferns and jasmine had a protective wire net against nesting birds....ummm I am sure St. Francis would not have approved. The "smallest monastery" became evident, in the middle of the much later buildings.
The original area of the monastery founded by San Pedro de Alcantara was based on an existing building next to the Fuente de Pedrosa, a spring of famed healing qualities which also nurtured a particularly fertile fig tree, the fruit doled out by the brothers to pilgrims in search of cures. In a mere 30 x was a Lilliputian world including a chapel adorned with gleaming intricate mosaics added in the 1950s depictingangels, S.Pedro and his faithful follower S. Teresa de Avila. 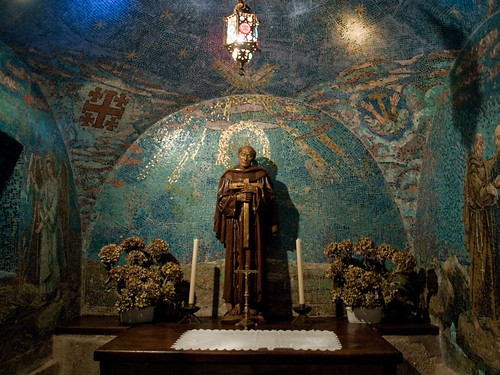 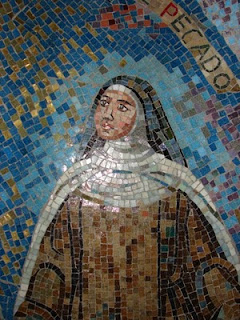 A tiny courtyard open to the sky with a tank to collect rainwater, a few cells only just big enough for a very small person to stretch out, a kitchen which was really just a primitive open fire in the corner, a refectory, the monks ate their frugal meals in a kneeling position from bare stone ledges..........and the smallest space in the whole area was a 1m2 cubby hole under the crude stairs,here San Pedro crouched on a stone block with his head resting on a wooden pole for only 1 1/2 hours sleep every night and was observed to sometimes levitate during particularly ecstatic moments. 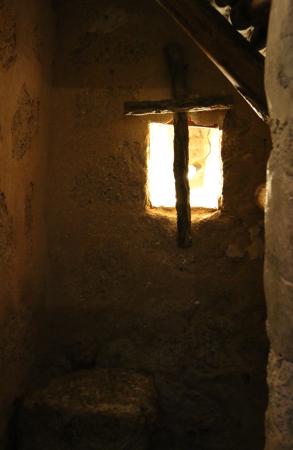 Apparently he only ate every 3 days, never meat, fish or eggs, went barefoot all year and wore a metal vest under his habit which had been driven with nails leaving sharp barbs on the inside...........no wonder he couldn't sleep! 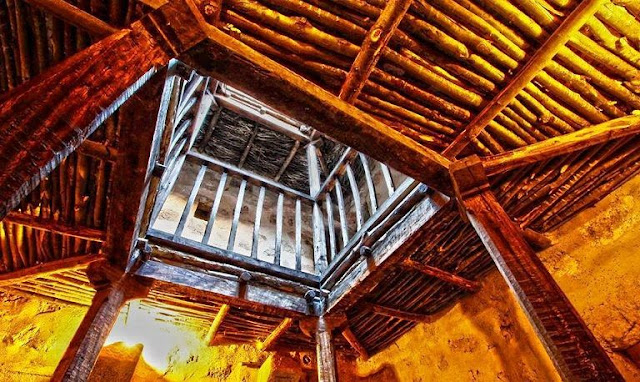 While brother Basilico was recounting all this we were bending almost double to get through the tiny doors and shivering in the damp cold, Manfred and I looked at each other and I am sorry to say our wordless comment was 'what a weirdo!' In his earlier life he had been attracted to the austerity of the Franciscans but deeming the order not rigorous enough he was the author of the ‘Constitutions of the Stricter Observants’ an even more severe code of conduct. Not surprisingly there was a general outcry and San Pedro was forced to search for a place where he could follow his stringent rules in peace. He found it in on the Arrabida peninsula, a very beautiful setting for a group of hermitages and monastic buildings built on a remote and inaccessible part of the coast. These can still be seen today and were featured in Manolo Oliveira’s film, ‘O Convento’. After several years in he returned to walk to , bare foot of course, to ask permission from the pope Julius III to establish some poor convents in Extremadura under his guidance and code of conduct. Pedrosa and Plasencia are still in existence as buildings but it seems the ‘stricter observations’ are long gone. Brother Basilico looked cosy in his woolly socks and sandals and the newer part of the monastery looked clean, spacious and probably warm for the 8 remaining brothers. San Pedro de Alcàntara is the patron saint of Extremadura and is greatly esteemed as can be observed at his statue in the Plaza de in , the statue is gaunt, austere, bronze with a dull patina ….except the bony feet which have been kissed and stroked to a bright gleaming gold. 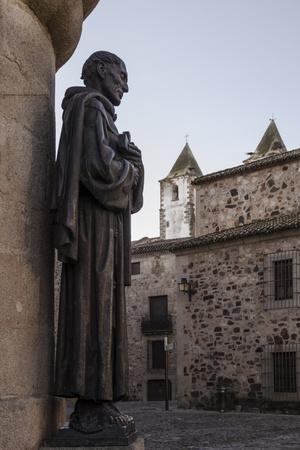 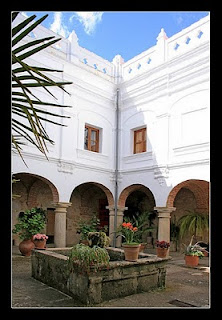 Email ThisBlogThis!Share to TwitterShare to FacebookShare to Pinterest
Labels: Excursion from Finca al-manzil