NEVER ON A SUNDAY? 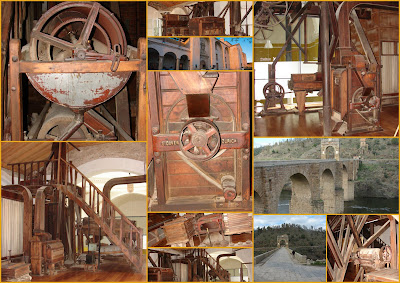 Sunday is not the ideal day for an excursion but somehow old rhythms kick in and it's often on a Sunday that we get that "let's go" feeling. My objection to Sundays is because of something lacking in the hustle and bustle of town and village life....i.e. no shops open! Anywhere else it would mean lots of other people with the "let's go" feeling but here in Extremadura that doesn't really apply.........as you can see in the photos, it's just us, empty roads and hardly a soul around.
We were off to Alcantára and then across the border into Portugal and the newly created Parque Internacional de Tejo/Tajo, a nature reserve covering an area on the border between Spain and Portugal which is divided by the river Tejo in Portuguese and Tajo in Spanish. This was going to be a quick day long excursion but we vow to go again for at least 2 or 3 days to visit all the fantastic medieval villages on the Portuguese side of the border in this area. Our first stop was Alcantára for a coffee at the marvellous Hotel Hospedería Conventual de Alcántara which was the XV century Convento de San Bartolomé, a Franciscan monastery. The order gave up the convent, it fell into a semi-ruinous state then part of it was used as a flour mill in the early XX century. It is a unique entrance, after passing through the traditional austere portal into the convent one is confronted with the towering structure of the flour mill ascending through 3 floors, beautifully restored with shiny brass, intricate mechanisms and creaky wooden staircases. The rest of the convent has been preserved but not restored in its original atmosphere except maybe for the simplicity, quite modern if not exactly edgy. We crossed the eternally impressive , named by the Moors, Kantara-Ass-Saif, meaning "Bridge of the Sword" because a golden Roman sword was found buried in part of the bridge during restoration. The present structure has the original 1st century Roman foundations but has certainly been knocked about a bit since then, not least by the French army in the war. Certainly the present impression is of massive stone solidity, much of the ruined Roman masonry was used in the restoration, it's the most marvellous feeling to walk or drive over the huge stone slabs passing by a Roman temple at the entrance, no doubt built for libations to the gods before crossing over the yawning chasm below, nowadays the view up river if rather overwhelmed by the monstrous wall of the new dam.
Soon after the bridge is the border with Portugal, we chose to cross near the village of Salvaterra do Extremo which has a beautiful situation above the river Ergas with a great view across the gorge to the Peñafiel castle seemingly teetering on the edge of a high cliff, flocks of griffon vultures nesting in the towers and the cliff face. Such a sleepy little village surrounded by olive groves and stone walls. No one around except for a few anachronisms, widows in deepest black shuffling towards the very pretty cemetery, maybe for a chat with their dearly departed or just to have a gossip and enjoy the marvellous view down to the river valley.
We continued on our way in a loop back towards the bridge at Alcantára. On the way we clambered down to take a closer look at the water mill by the Puente de Segura. This is also a marvellous Roman bridge from the 1st century, it now marks the border between and . The mill is down a track on the Portuguese side and is accessed over a small wooden bridge. After all the rain we have had recently the river Ergas was in full flow, dramatically crashing over the weir beyond the mill pond. The mill is a ruin but interesting to see the remains of mill stones and the various mechanisms still surviving under the domed roof : built in this way to withstand the times when it would be completely submerged by swirling water. 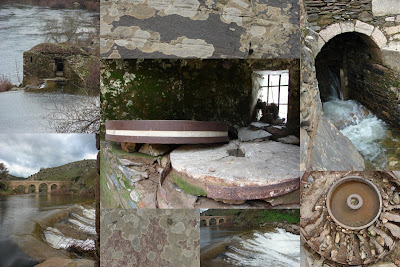 Over the bridge and back to , just before Alcantára we made a detour to the which means Starlings in Spanish. Seemingly deserted, this is the end of the road nowadays but in the centuries after the re-conquest when the Ruta de Santiago saw a constant throng of pilgrims this was the first stop after crossing the bridge at Alcantára, the church is dedicated to San Tiago, it has a curious bell tower separated from the nave. As we were retracing our route we noticed a sign for a megalithic menhir on a rough camino, El menhir del Cabezo, which of course was irresistible, especially as they are so rare in Extremadura, in fact there are none south of the 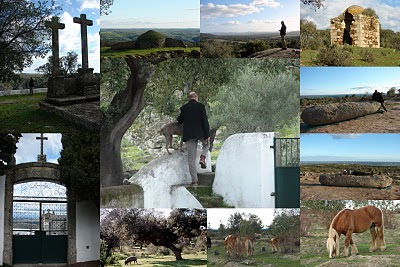 There was no indication of distance but the sun was still shining and Roxy needed a walk so off we went. Just at the beginning of the track was a ruined humilladero which is a small chapel for praying on the route of a pilgrimage; with its domed roof it reminded me of marabouts which are scattered all over Morocco in honour of various sidis or saints. Nearly an hour later we were still walking hopefully in the right direction, the signs were few and far between, a simple white and yellow slash here and there. We were climbing all the time, not surprising as menhirs are usually on higher ground. Finally we found it in a boring stretch of country which had recently been a eucalyptus plantation. In fact they say that's how the menhir became horizontal rather than proudly erect, some disturbance from machines used to plant the trees. I hope it will be re-erected at some point, it would be quite imposing at 4.60m x 1.10m. There are curious circles and spirals inscribed, maybe sun signs. So many theories about menhirs; objects pertaining to astronomy, fertility rites, funereal rites, territory demarcations? While we were taking silly photos with suitable menhir poses we were joined by whole band of lovely horses, obviously left to their own devices in this wild and lonely place. They were a bit like Haflingers, with beautiful blond manes and tails, certainly strong work horses. It was well worth the walk through pretty countryside crossing and re-crossing streams with some vast views. Dusk was falling fast so time to head home. It only takes an hour to reach this area
from Finca al-manzil, a delightful route via Garrovillas and Caceres to Alcántara.