Botija and walk to Villaviejas, a Celtic -Iberian archaeological site

Coming back from Trujillo we took a route near La Cumbre. There is a road with an extensive project to provide nest boxes on every telephone post, many of them were occupied by the beautiful European Roller, my first sighting of this bird, astounded by the gorgeous plumage.
Arriving in Botija we wanted to do a new walk, a continuation  from the mill buildings on the River Tamuja, along the river bank to Villaviejas, the remains of a Celtic Iberian village of the Vettone tribe, circa 200 -50 B.C.
Before the walk we strolled around the village, on first sight nothing special but there were many points of interest. 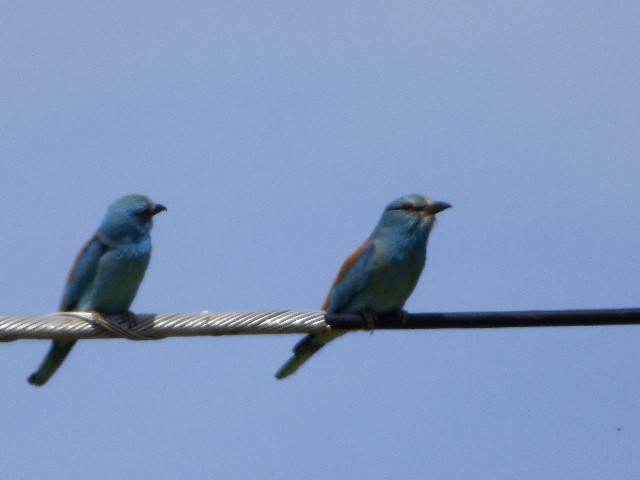 The Church of Santa Maria Magalena is a simple rustic structure from the XV1 century but it has charm and gives some great  perspectives from the surrounding olive groves. 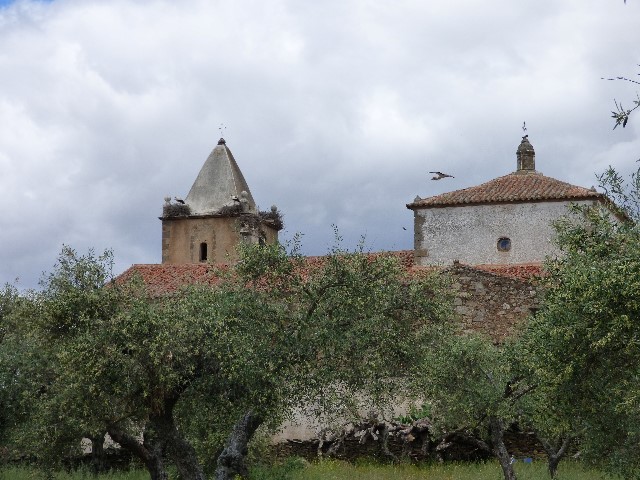 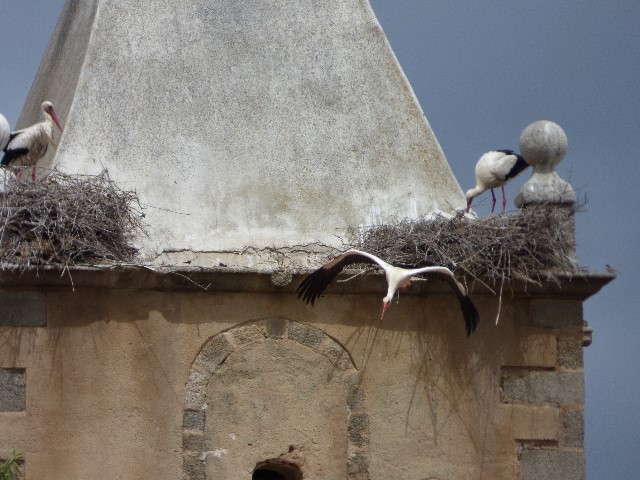 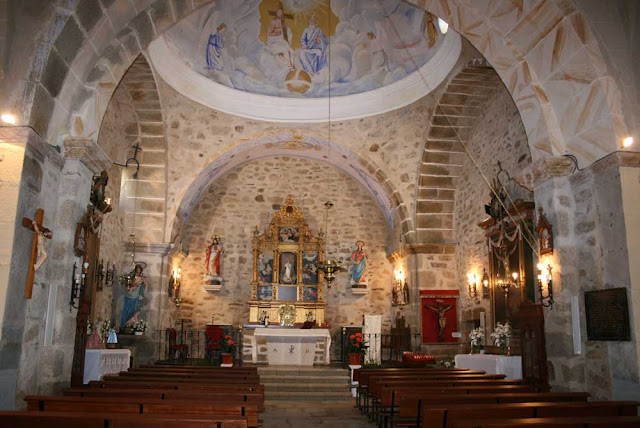 The village is built from the surrounding stone, slate. On the more humble buildings it is left exposed, unplastered. The wonderful craftmanship of laying the stone is exposed, intricate and fascinating. 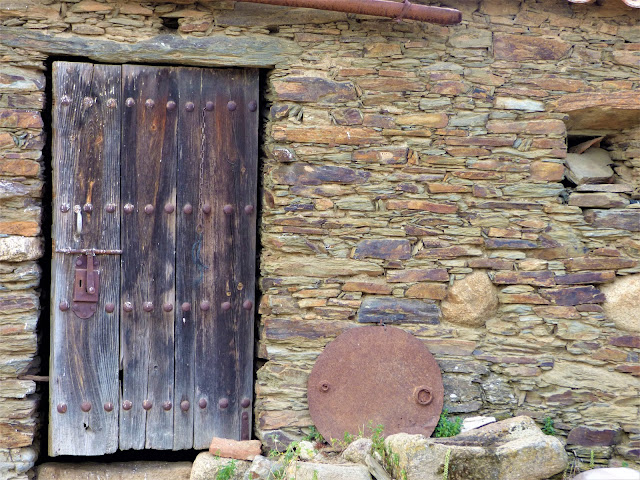 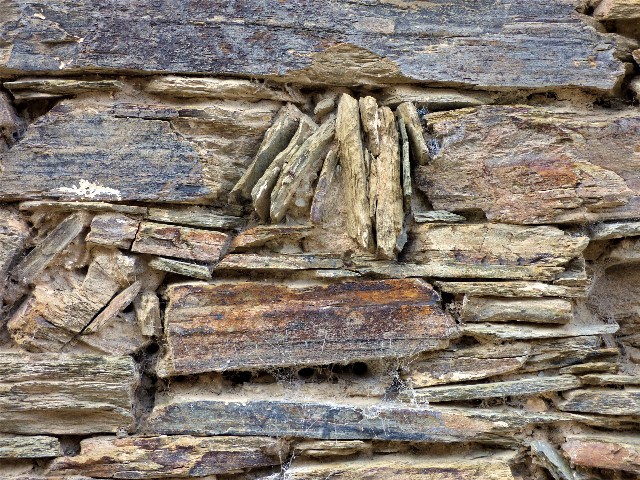 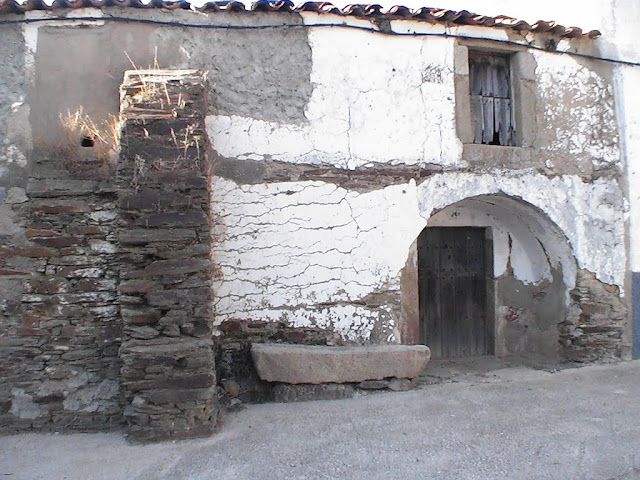 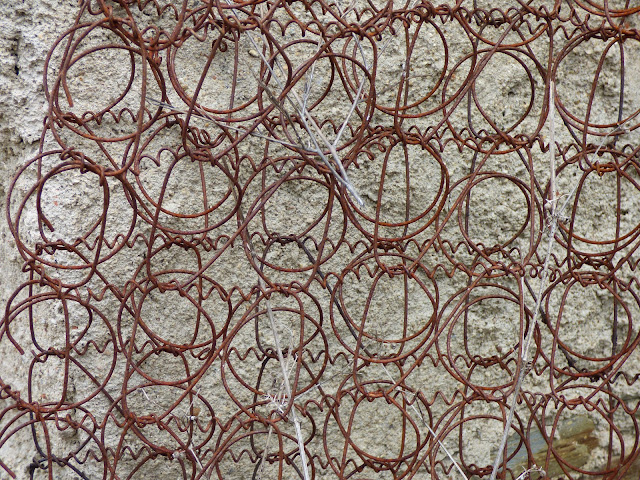 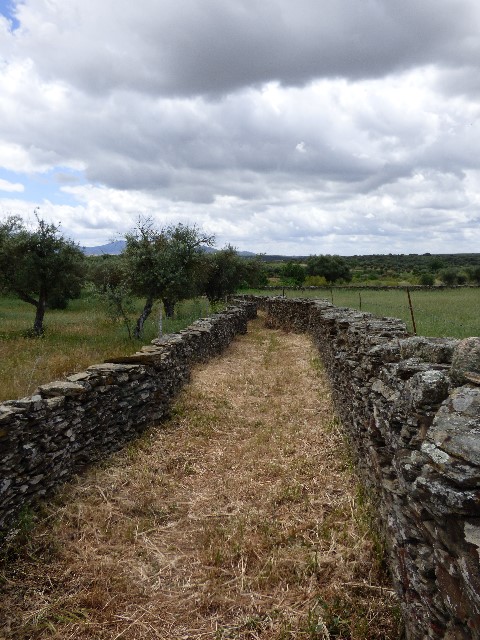 Paths between slate walls lead out of the village into the surrounding olive groves and pastures. On the edge of the village is a fascinating ruin, an old fabrica de aceites, not sure if this means an almazara, olive oil mill or not, needs further investigation. A little world of its own, behind the 3 metre surrounding walls were a courtyard, lots of barns and a secret garden. 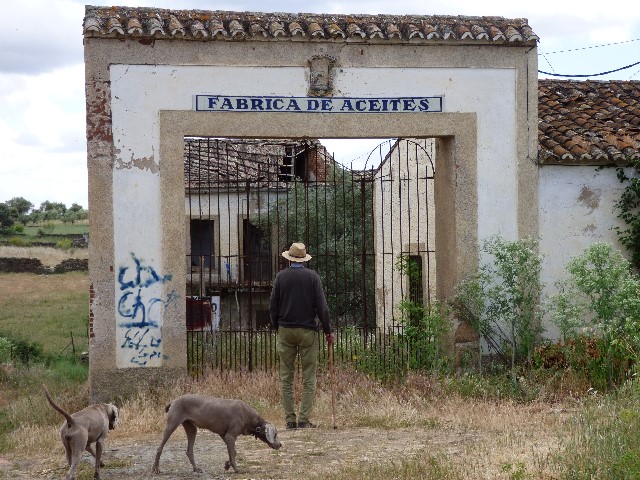 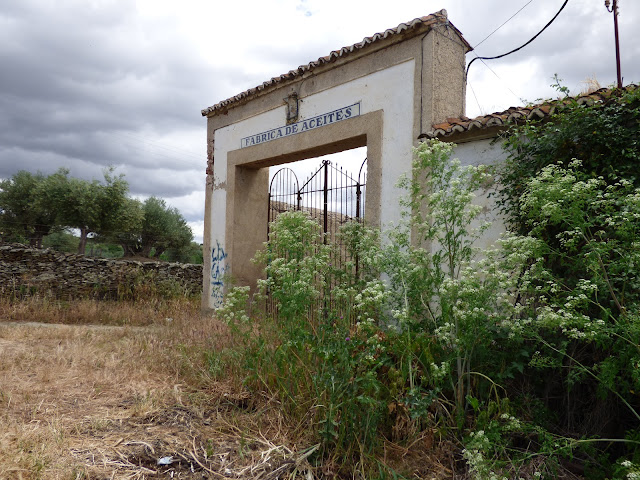 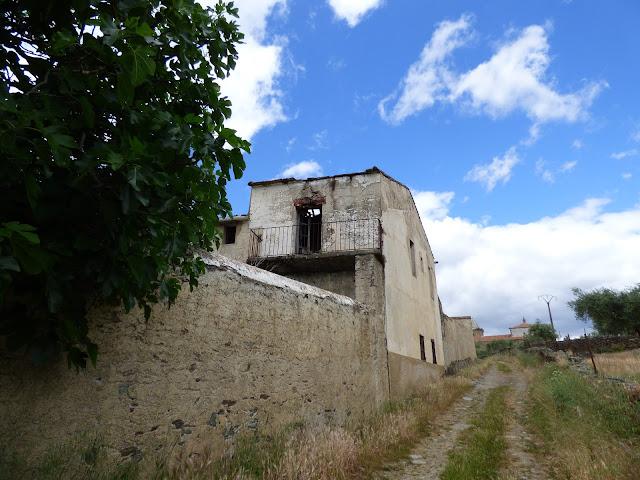 Today we started off on new territory beyond the molinos on the path to Villaviejas. 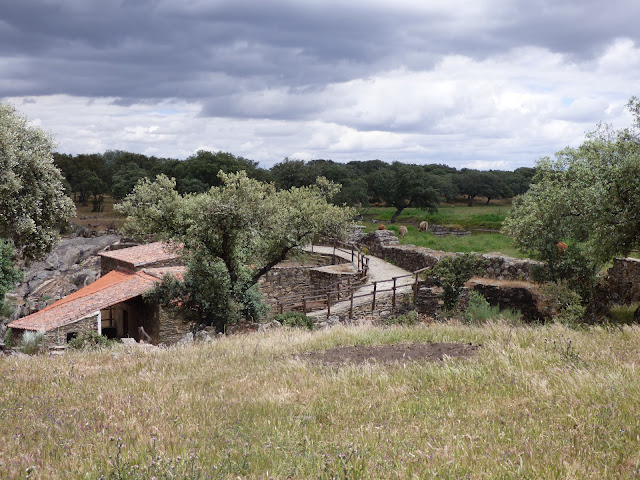 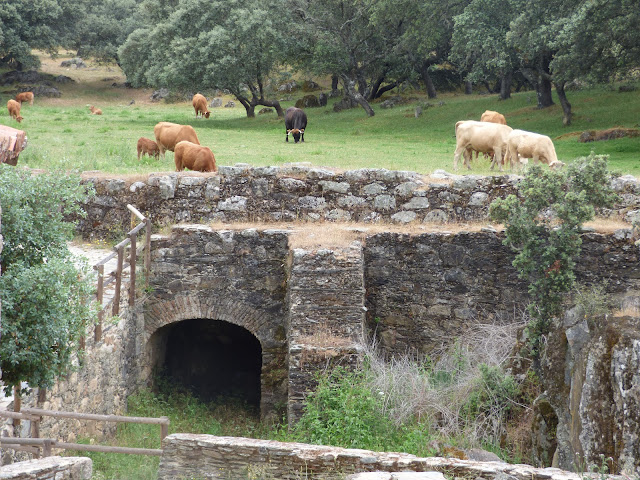 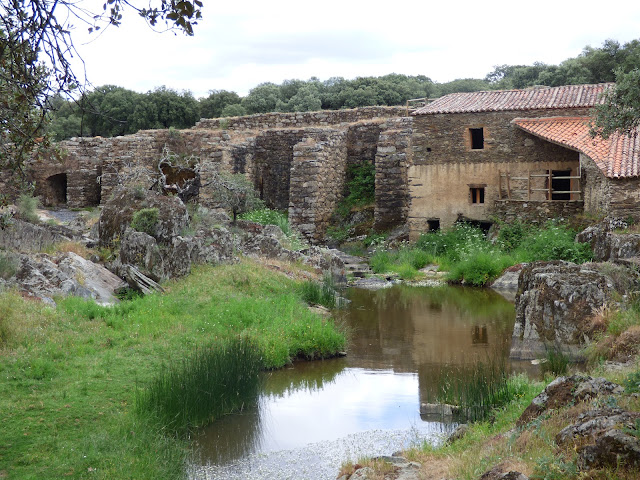 We walked for 25 minutes on a footpath which wound along the meandering Tamuja sometimes leaving the riverbank where the rocks were too steep. 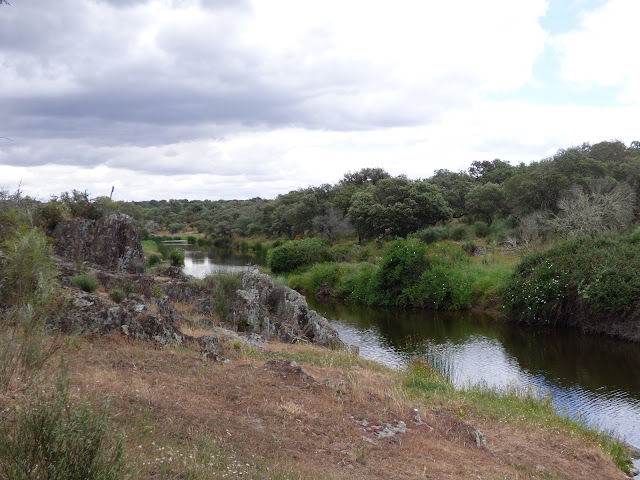 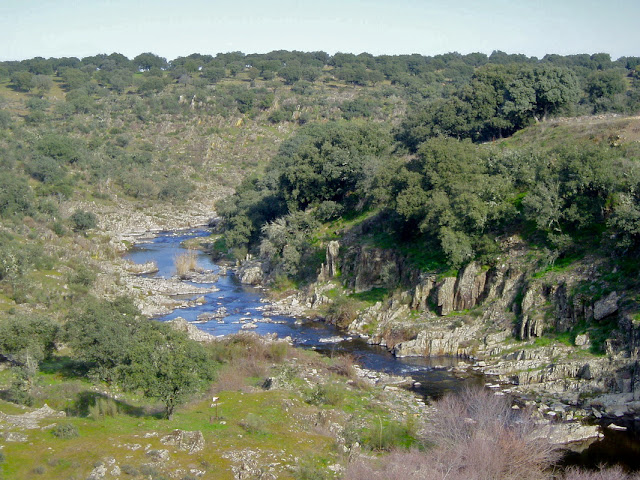 It is not really obvious when arriving at the site of Villaviejas, it is on a bend of the river, on the opposite bank and relatively high above a natural slate embankment, a good defensive position.
It is easy to cross the river at this time of the year, plenty of exposed rocks to use as stepping stones. 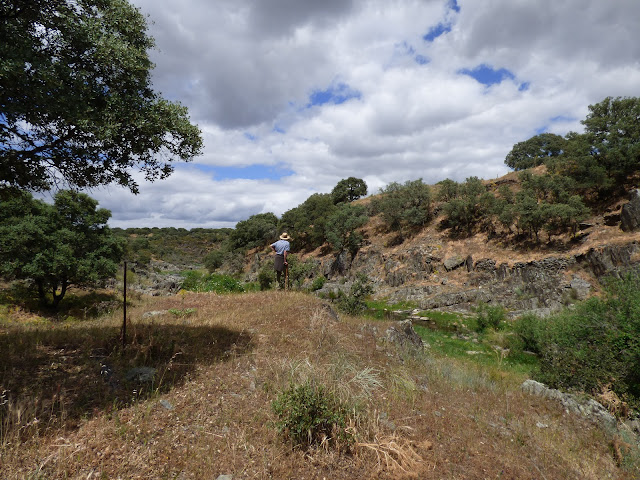 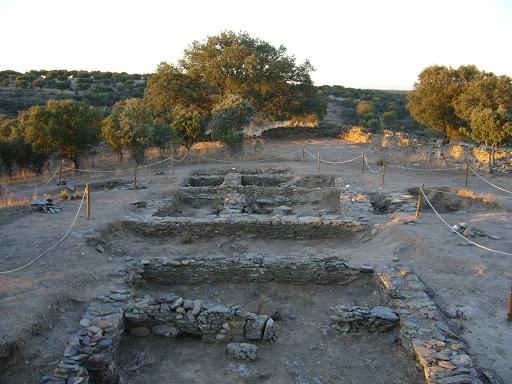 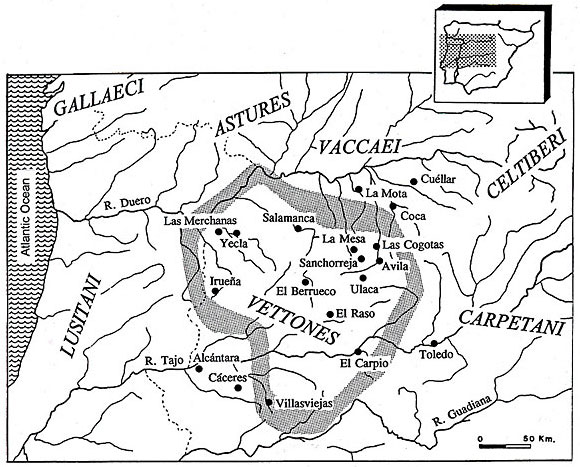 The Vettones were a pre-roman Celtic Iberic tribe covering an area between Salamanca, Alcantara and Toledo with Villaviejas being the most southerly settlement. They were active for about 400 years before the Romans  gradually making more established and populous settlements. With the coming of the romans the remote rural settlements survived for a time but were gradually absorbed into the roman organization of their new colony Lusitania with Merida as the capital.
For very detailed and interesting information about the Vettones  and their mode of life, read on here-

Email ThisBlogThis!Share to TwitterShare to FacebookShare to Pinterest
Labels: Extremadura, Walking Through the Centuries