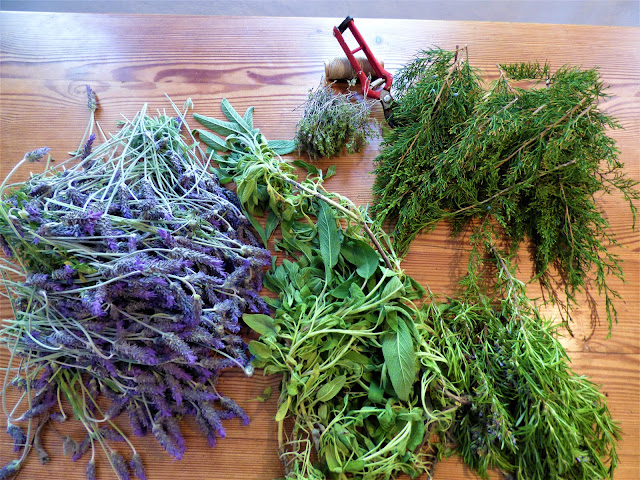 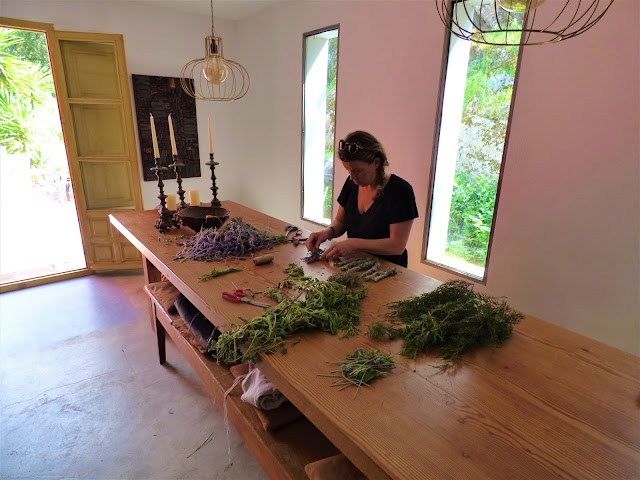 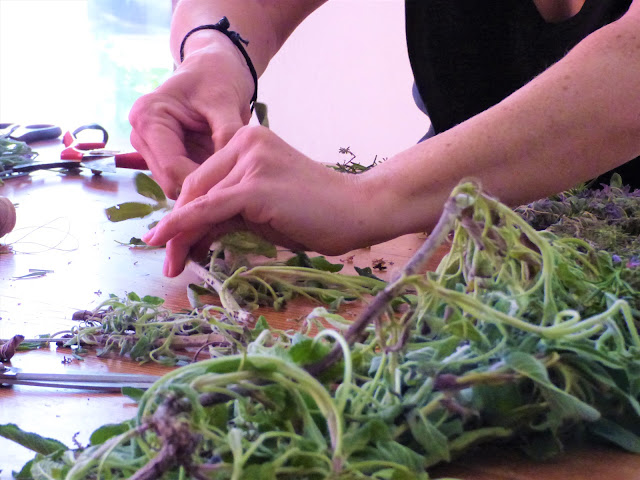 What are smudge sticks? Simply a bundle of dried herbs that have been wrapped together into a stick, light the tip, blow out the flame, and allow the fragrant smoke to waft through a space or around the body. The term “smudging” refers to a ceremonial or ritual practice of burning herbs to purify and cleanse a space or other people. Burning herbs and using aromatic smoke in ritual has been practiced since ancient times, it spans many different cultures worldwide.
Why Use Smudge Sticks? Using smudge sticks, or smudging, as it is called, is a way to connect to plants and herbs in nature-focused, spiritual practice.
Burn white sage or cedar when feeling stressed, anxious, or overwhelmed.
The aroma and sight of the smoke swirling around has an almost magical effect at easing tension and enhancing peaceful energy.
Each plant has its own properties, so there are many reasons to make a variety of smudge sticks.
For example, white sage is often used to cleanse and purify.
Cedar is used to boost positive energy.
Mugwort is used for dream work and divination.
Lavender is used for calming and de-stressing. 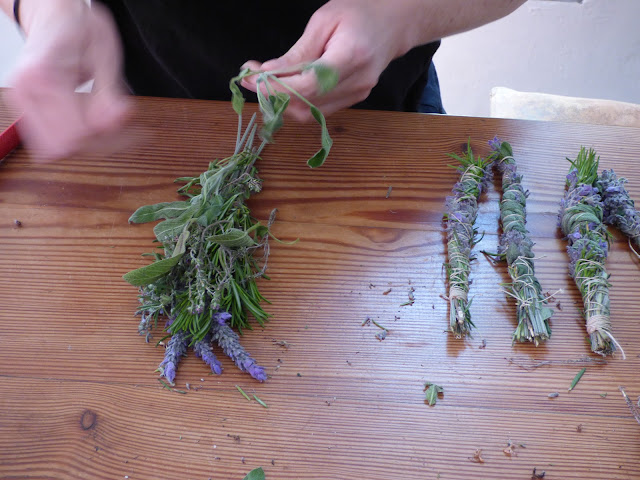 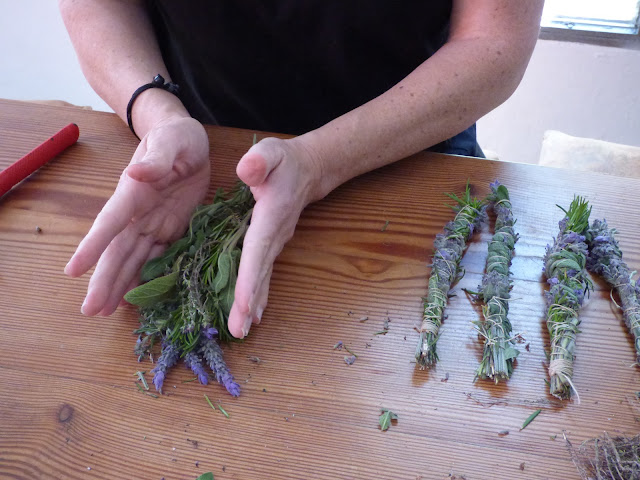 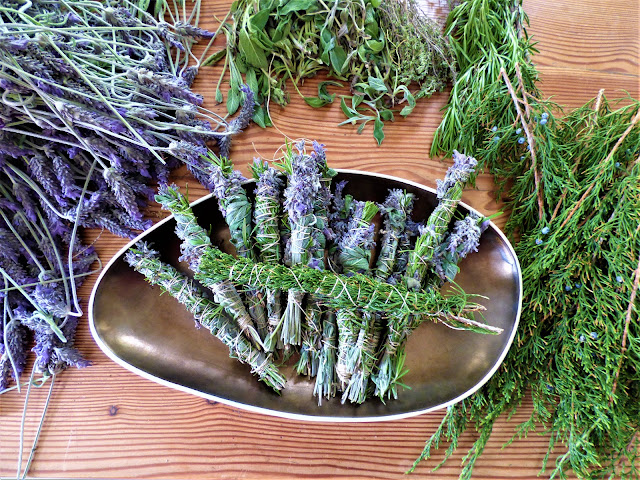 How To Use Smudge Sticks Simply light one end with a match, lighter, or candle. Hold the bundle in the flame for a few seconds, once there is a flame, wave the smudge stick or gently blow the flame out to release the aromatic smoke.
Wave it around a space, or over/under an object that you want to purify or charge.
You may need to relight the smudge stick several times. Some herbs (like catmint or Russian sage) will burn until the stick is completely used up, while cedar and many others need to be re-lit frequently during use.
Have a heat-resistant container nearby when using smudge sticks for resting the stick between burnings.
Smudge Stick Making
1: Gather The Herbs
Use a pair of pruning shears to cut what is needed.
Any time of year is fine for harvesting evergreens like cedar and pine. For everything else the best time to harvest is when it is in bloom in spring or summer.
2: Pre-Dry
Before you can wrap most herbs into a smudge stick, hang them up to dry slightly for a day or two.
The hers should just be starting to dry but not be crispy. There should be enough moisture left to wrap them up without pieces crumbling off.
Typically, herbs are ready within 24-48 hours after harvest.
The exception is evergreens like pine, cedar, cypress, and juniper, which can be wrapped up into a smudge stick immediately.
Be sure to wrap the string extra tight when working with evergreens as the smudge stick will shrink in diameter slightly as they dry.

3: Bind Them Up
Tying up smudge sticks is the trickiest part. Here’s how to do it:

a: Tie the bundle together about an inch from the base. Make sure it’s a tight, double knot. Be sure to leave a couple inches of string at the base. You’ll need this extra couple inches of string later. Natural cotton embroidery or any natural, untreated thread or string that is strong enough to pull tightly around a bundle of herbs.
b: Wrap the string tightly around the base several times.

4: Dry Completely
After you wrap your smudge sticks, hang them back up to dry completely. This process may take as little as a week or two, or as long as 8-10 weeks (especially if working with cedar, pine, cypress, and juniper).

How To Store Smudge Sticks
Perhaps the best way to store smudge sticks (after they have been thoroughly dried) is to place them in an air-tight, glass mason jar out of direct sunlight.
Keep smudge sticks separate from each other. Store all cedar smudges together, don’t put a variety of smudge sticks together as the aromas tend to blend with undesirable results.
Use up your smudges within one year.

Plants To Use For Smudging
Just about any plant can be used for making smudge sticks, but some just work and smell better than most.
Sage (Salvia sp.)
Sage is one of the most popular smudge stick materials. The common name itself is associated with wisdom and spirituality.
White sage (salvia apiana) is THE quintessential smudge stick herb
When feeling stressed or anxious, lighting a dried leaf of white sage calms  and shifts energy quickly. Common kitchen sage (salvia officianalis) can be used as well.
Symbolism: Purification, cleansing, wisdom.
Harvest: Harvest kitchen sage anytime,  or wait until it flowers to incorporate the blossoms into the smudge.
Cedar/Arborvitae (Thuja sp.)
Cedar is, perhaps, the second most commonly used smudge.
Cedar is considered a sacred plant in many cultures.
The scent is a wonderful, sweet woody smell, and cedar wood is a good alternative to palo santo wood.
Symbolism: Cedar is said to cleanse and purify, while boosting positive energy in a space.
Harvest: Any time of year is okay for cedar
Smudge Tips: Unlike some other smudging herbs, cedar won’t stay lit, simply use a tealight candle and hold the cedar smudge stick over it until it produces smoke.
Be sure to let a cedar smudge stick dry for at least 6-8 weeks before use.
Mugwort/Croneswort (Artemesia vulgaris)
Mugwort is often used in dreamwork and divination, but can also be used to purify and cleanse. Also known as “Croneswort” or “Dreamwort”.
Symbolism: Dreaming, purification, wisdom, divination.
Harvest: When in bloom – late summer, early autumn.
Smudge Tips: Better to burn mugwort outdoors, the smell can be strong and lingering when burned in small spaces. With mugwort, a little goes a long way.
Be sure to incorporate the floral stalks into the smudge stick for the best aroma.
Juniper (Juniperus sp.)
Juniper is another evergreen that is great to use in smudge sticks. It’s a common landscape shrub and tree.
Symbolims: Abundance, protection home and property.
Harvest: Anytime. Late summer if you want to include the “berries” in the smudge sticks.
Smudge Tips: A juniper smudge stick can take up to 6-8 weeks to fully dry before it can be used.
Pine (Pinus sp.)
Pine has a sweet smell when burned and produces a lot of smoke due to the resins in the twigs.
Symbolism: White pine (Pinus strobus) – Peace, releasing grudges, prosperity; Black pine (Pinus nigra): Protection, good fortune, prosperity.
Harvest: Anytime.
Smudge Tips: It is tricky to get started, use a tea light to relight it. However, once it get going it smokes well without needing to be re-lit.
A pine smudge stick can take 6 weeks or so to fully dry before it can be used.
Cypress
Cypress is another evergreen that is great to make into a smudge stick.
Symbolism: Cypress is associated with death and the underworld/afterlife, so it’s a good plant to use when letting go, releasing, or doing any ancestor work
Harvest: Anytime.
Smudge Tips: A cypress smudge stick can take up to 6 weeks to fully dry before use.
Russian Sage (Perovskia atriplicifolia)
Russian sage has a wonderful musky/minty smell, and once a dried smudge stick is lit, it burns until you either put it out or the smudge stick is used up.
Symbolism: Wisdom, knowledge, resilience.
Harvest: When in bloom – typically mid-late summer.
Smudge Tips: Russian sage can get a bit sticky when you work with it, so wash your hands well with soap afterward.
Catmint (Nepeta sp.)
Catmint is another common garden plant that makes a wonderful smelling smudge stick, and is super easy to burn.
It is related to catnip (also in the genus Nepeta), which can also be used in a smudge.
Symbolism: Affection, rejuvenation.
Harvest: When in bloom – typically late-spring.
Yarrow (Achillea millefolium)
According to myth, the Trojan War hero, Achilles, was taught to use yarrow to treat his soldiers’ battle wounds. Yarrow was an important healing herb for soldiers in ancient times.
Yarrow has a mild aroma and burns  quickly.
Symbolism: Healing, protection.
Harvest: When in bloom – late spring/early summer.
Lavender (Lavandula sp.)
Lavender is a popular smudge herb that can be combined with other herbs (like sage) in a smudge stick, or used alone.
Lavender has a distinctive, floral aroma that promotes relaxation and sleep.
Symbolism: Peace, love, harmony.
Harvest: Anytime, or after it blooms in you wish to incorporate the flowers into the smudge stick.