Staying at Cascais: a week by the sea and hiking in the woods of Sintra

It only takes 3 1/2 hours to reach the Portuguese coast at Cascais, Lucy and I hit the road, an easy drive to visit my sister, a long awaited re-union of sisters, aunts, cousins, mothers and daughters, remembering our mothers and grandmothers, all the family but especially the girls! ..... a familia!

The weather was really beautiful for fab walks with Vicky, Kate and Lucy along the cliffs and beaches further north of Cascais, Guincho, Adraga, Magoito and Azenhas de Mar. 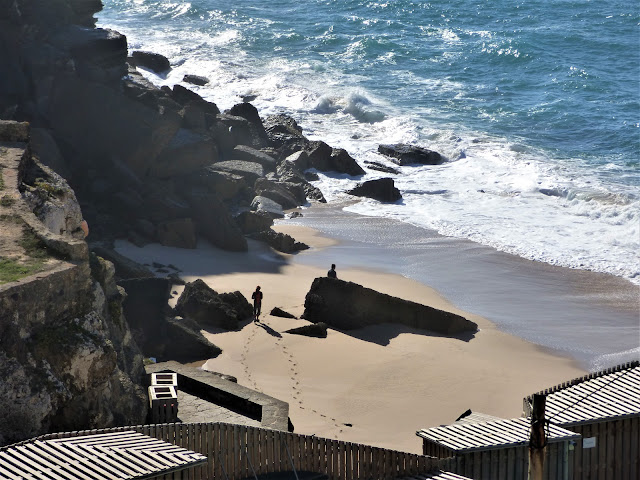 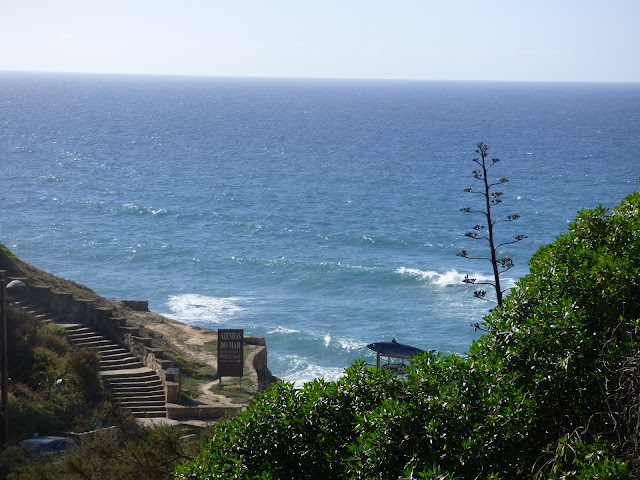 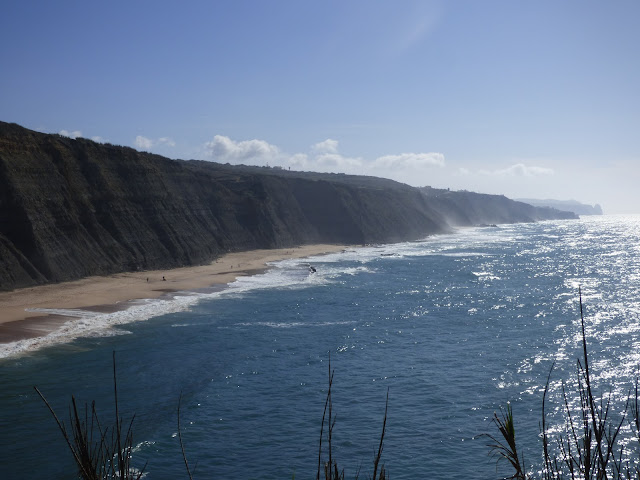 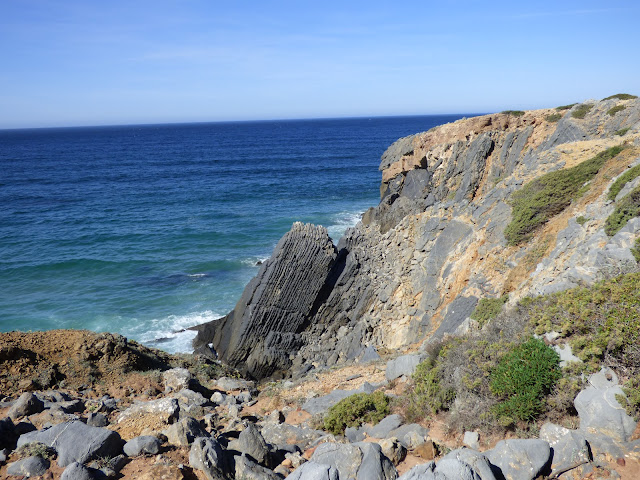 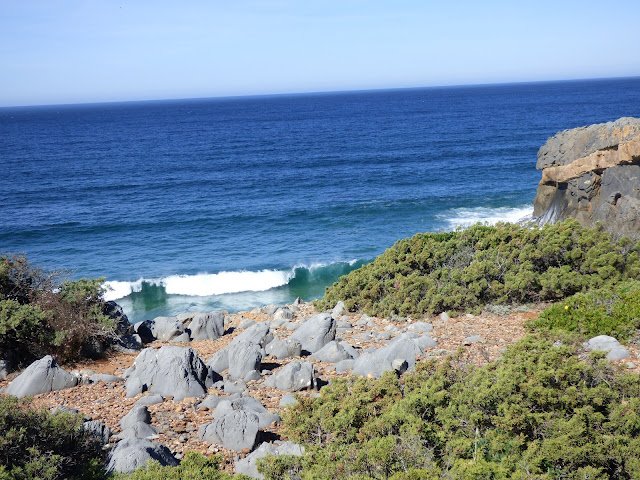 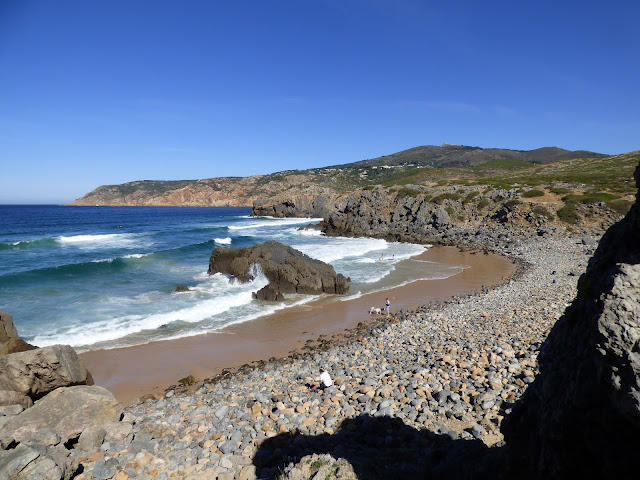 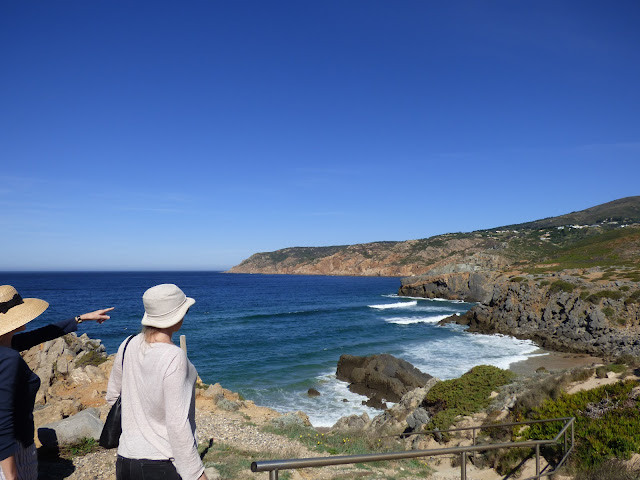 A little stroll through Cascais 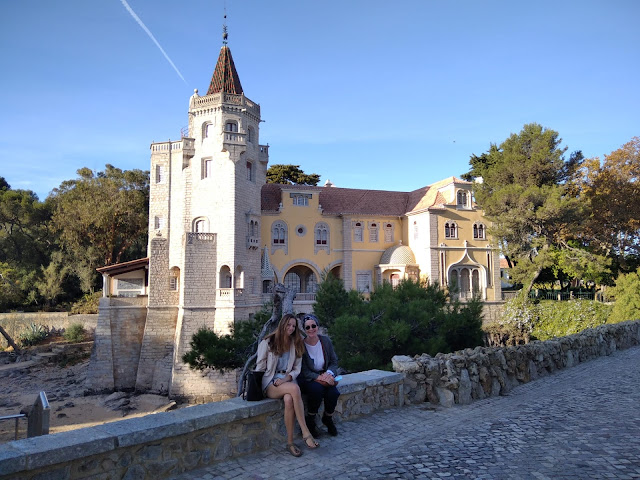 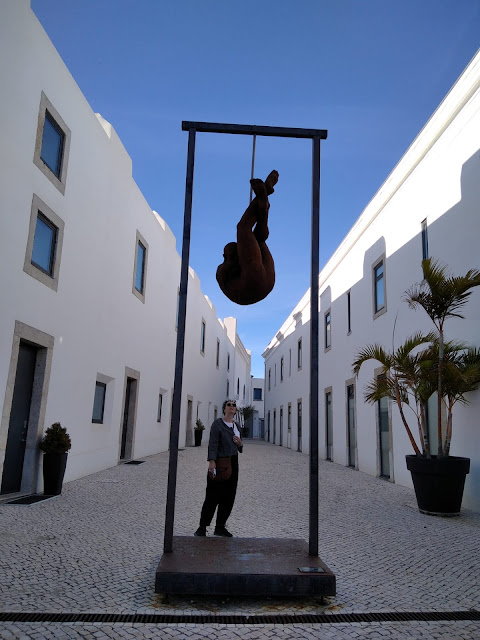 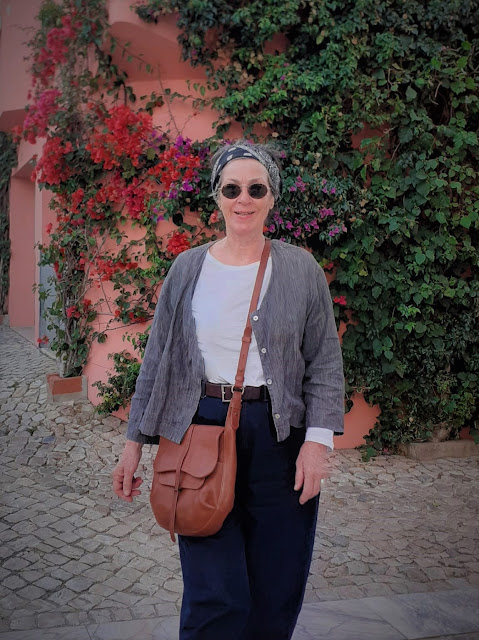 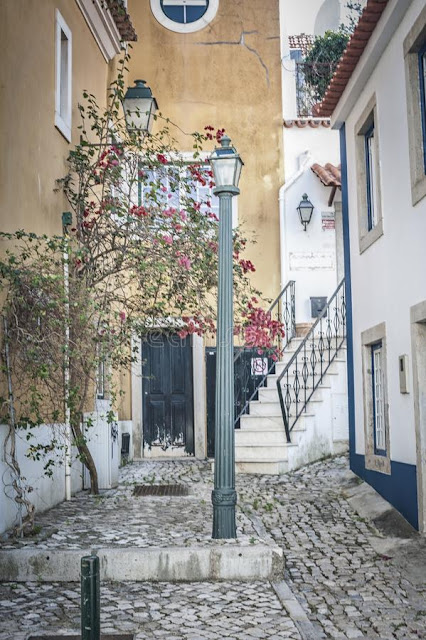 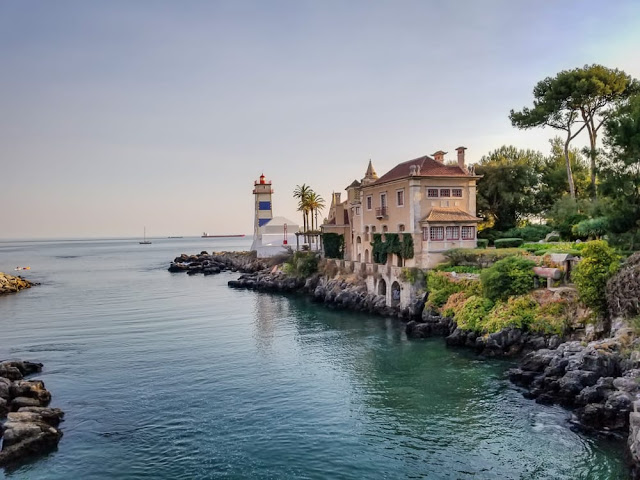 A day out in the fabled woods of Sintra. Highlight was a steep climb up to the Moorish castle ruins which dominate the skyline above the town with fabulous views of the Atlantic coast and to Palacio de Pena on another crag. Great views of the Royal Palacio and many eccentric 19th century houses.

Sintra was the inspiration for part of Byron's ‘Childe Harold’s Pilgrimage’, about a young nobleman on the Grand Tour of Europe, in the poem it is spelled "Cintra" an antiquated spelling.

He was staying at Lawrence’s Inn, a popular hotel still open to guests today. At that time it was frequented by British visitors, many of them like Byron on a Grand Tour of Europe. It was run by Mrs Dyson who was pleased to settle her titled guest into his first-floor bedroom. Declaring his immediate admiration of the sweeping views across the hilltops and the valleys, Byron declared:

Oh Christ! It is a goodly sight to see.
What heaven hath done for this delicious land!

Captivated by an idealized natural world that could only be appreciated by men of sensibility, Childe Harold is a true romantic, awe-struck to find he has unlocked “Elysium’s gates”. 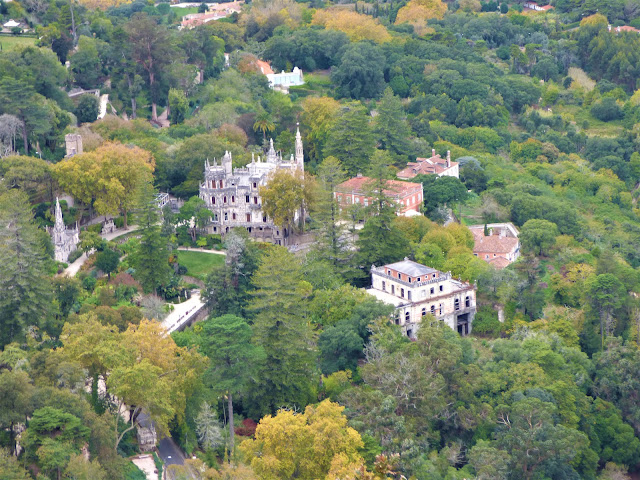 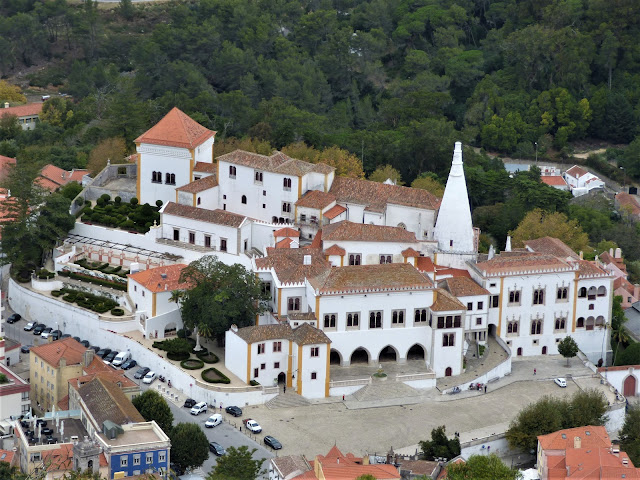 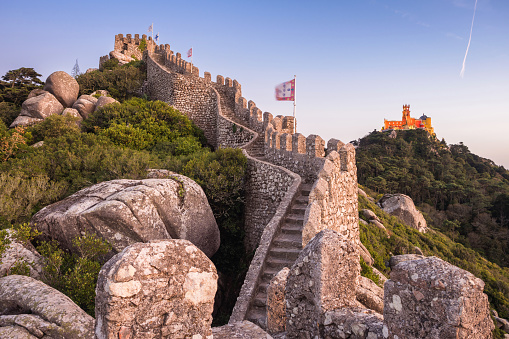 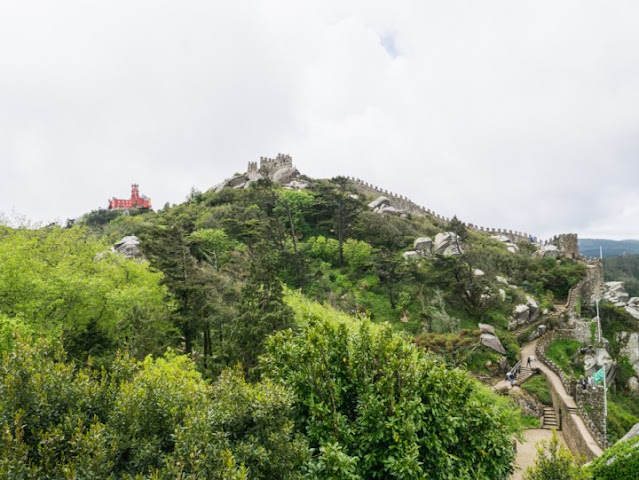 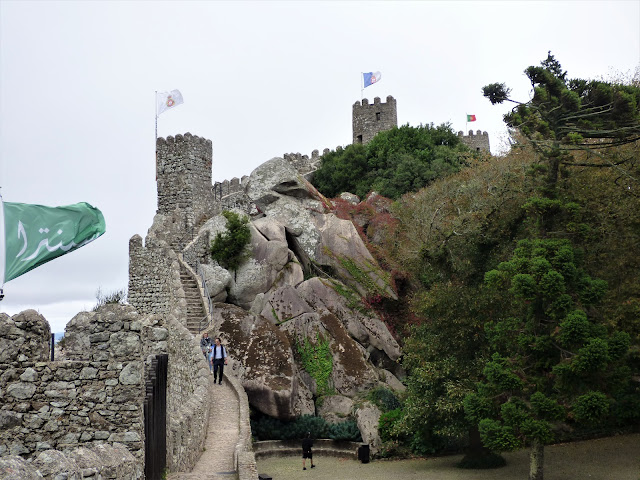 The Moorish castle had fallen into total ruin over the centuries until King Consort Ferdinand II restored the extensive outer walls and towers to serve as a romantic view from his amazing building project, Palacio de Pena started in 1838.  Originally the site of the palacio was a humble chapel where King Manuel I was said to have seen the fleet of Vasco de Gama returning  from the historical voyage of 1499 discovering the sea route to India, the spice route, thus making Portugal a rich and powerful country in the 16th century, to commemorate the event he built a monastery on the crag which fell into ruin until Ferdinand II chose the magical site for his new palacio and extensive exotic gardens. It is said that King Ludwig II of Bavaria based his castle Neuschwanstein on Pena copying the bizarre melange of styles, it is quite possible as the Ludwig and Ferdinand were related through the Saxe-Coberg and Gotha dynasty.
Moorish, Gothic, Manueline, Renaissance and Baroque but also many alchemistic symbols as Ferdinand was a grand master of the Rosicrucian order.
Ferdinand and his second wife, a Swiss opera singer, welcomed many artists to their unusual home, among them composer Richard Strauss, who called it “the castle of the Holy Grail.” 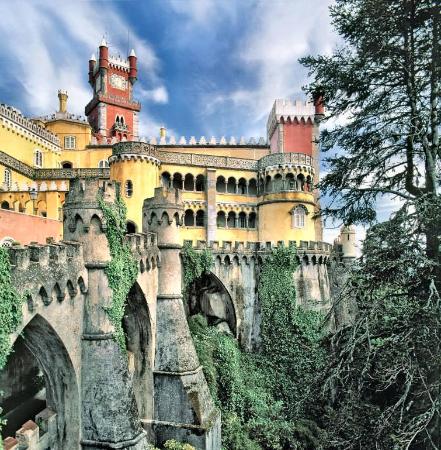 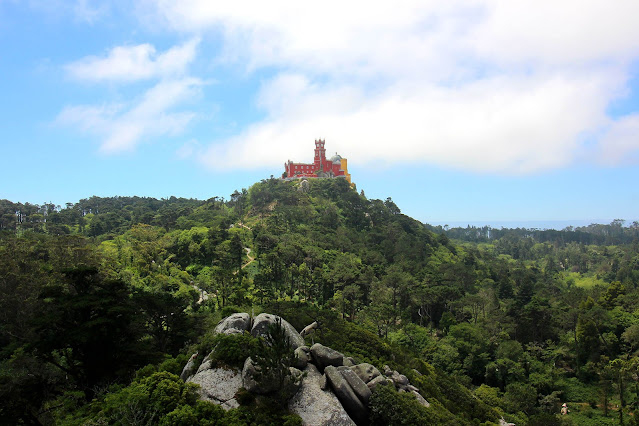 Down in the charming town of Sintra the Royal Palace dominates the town, a delight to see it without too many tourists. 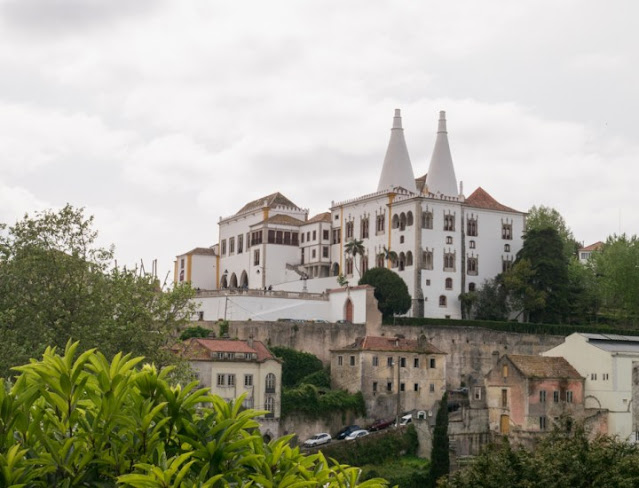 The palace was shaped and influenced by the different artistic trends prevailing in each period from the 11th century under Moorish rule until the last Royal family of Portugal at the beginning of the 20th century. Gothic and Manueline architecture are particularly evident, also a very heavy emphasis on the Mudejar style – a symbiosis between Christian and Muslim art, all creating a magical atmosphere.

I love the hidden corners in the gardens and patios; an old washing tank with relieves of a black servant scrubbing the laundry and another servant chatting, a fantastic lion sculpture above a pool and yet another pool at the café. 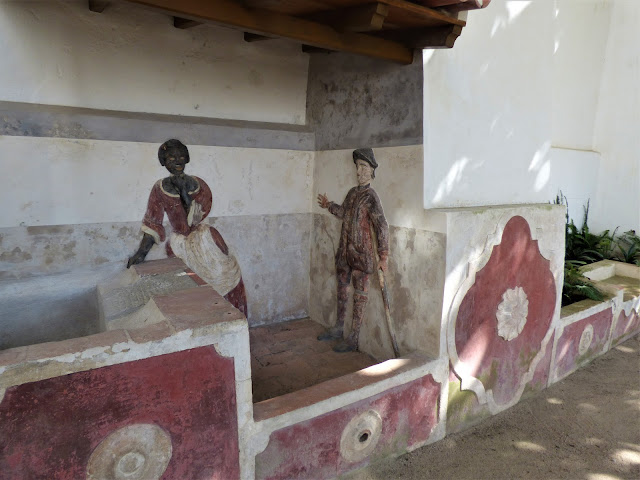 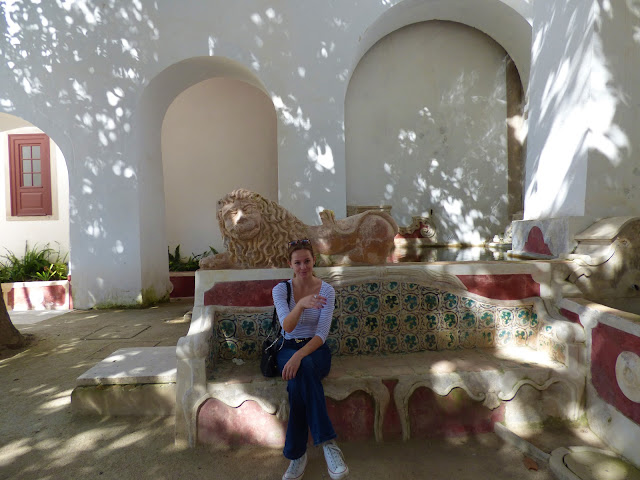 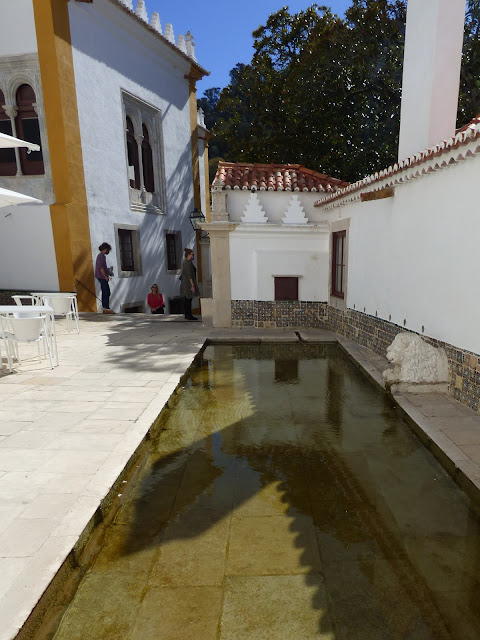 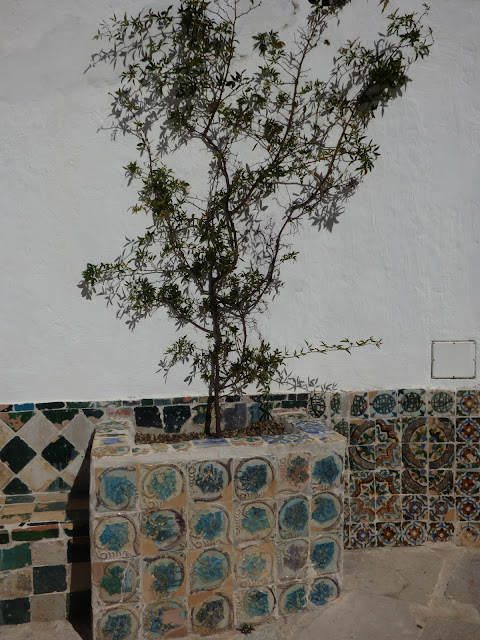 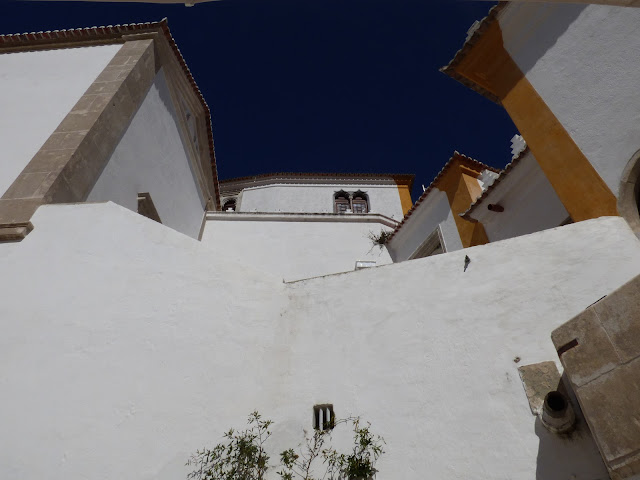 Finally the difficult decision of ordering coffee and which cakes at a wonderful pasteleria. 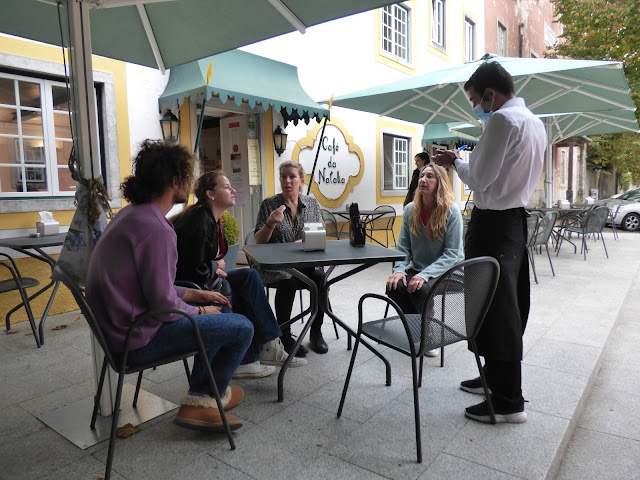 See this link for detailed history of the Moorish castle, Palacio de Pena and many other fabulous sites in Sintra and nearby https://www.parquesdesintra.pt/en/experiences/

Altogether a super break, total contrast to our tranquil life at the finca.