Las Hurdes- A remote corner of Extremadura with a terrible history 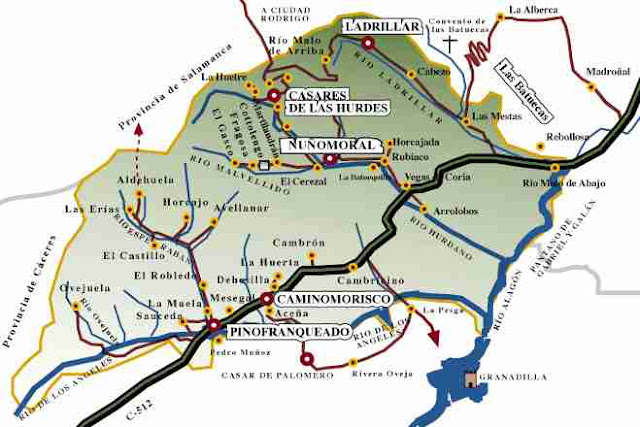 Just to say don't let this put you off, we have travelled all around Las Hurdes, the scenery is amazing and knowing its history gives the experience and extra depth.

Crossing Las Hurdes today is like  any other corner of Extremadura, Castilla or Aragón: paved roads for its residents, the “jurdanos” and tourists, new towns, raised behind the ruinous “black architecture” of slate slabs, healthy people with thriving agriculture.
No one wants to remember or to be reminded of a past marked by all kinds of stigmas, real or imaginary: starvation, illiteracy, savagery, poverty, malaria, tuberculosis, alcoholism, hysteria, incest, polygamy, sodomy, typhus, ringworm, smallpox, trachoma, syphilis, goitre and cretinism.
Las Hurdes was a notorious place, becoming mythical with stories about  its inhabitants; deformed bodies like monsters with large heads and bowed legs caused by rickets, edema and osteoarthritis, a closed in-bred population hidden away in the ill-fated valleys behind the mountains.
Chroniclers and travellers have perpetuated the horrors that they observed over the last 200 years: P. Nieremberg, Fray Tomás González, Benito Jerónimo Feijoo, George Borrow, Ramón Gómez de la Serna, Miguel de Unamuno, Maurice Legendre, Gregorio Marañón, J. Goyanes, José Mª Gabriel y Galán, Luis Buñuel, Antonio Ferres, Armando López Salinas and, more recently, Luis Carandell, Víctor Chamorro and Maurizio Catani.
In the mid-19th century, the biblical propagandist George Borrow heard of “a small nation or tribe of unknown people who spoke an unknown language, who lived there since the creation of the world, without crossing with other creatures and without knowing that there were other beings besides themselves ”(The Bible in Spain, 1842).
The Jurdanos were thought to be a singular race descended, according to legends, from the ancient Roman garrisons, scarecrows who walked naked or in rags, hiding in the thickets of the Batuecas. Word spread that they were political or religious refugees, such as the Moors expelled from Castilla and Andalusia or Jews escaping from the inquisition. For Gregorio Marañón, the doctor who accompanied the investigation of 1922, these people were “Spanish like the others, of the same race, with the same customs, the same religion and the same language; but more hungry than those of the poorest Castilian villages, almost entirely sick, an immense,mountainous retreat inhabited by people who seemed to have escaped from a hospital”Today Rodríguez Ibarra, president of the Junta de Extremadura, declared with rage: “There are still many visitors who come to Las Hurdes with a 'safarian' spirit, a video camera at the ready to capture the images that Buñuel had immortalized years ago, impossible to reproduce today”  Some environmentalists and archaeologists express their displeasure at the‘ intolerable ’advance of progress. People no longer have goitre; the roads that access Las Hurdes are nine meters wide; running water reaches all the houses; the towns have electric light.

Two Iconic films made about Las Hurdes in the 20th century.

The first is a record of the visit made by Alfonso XIII in 1922 accompanied by doctors and clergy. The images could be of medieval peasants living in extreme poverty and destitution. The statistics are awesome, thousands of people dying of starvation and disease, 15 children in every 100 born as what they describe as "cretinos" cruelly afflicted by congenital extreme mental and physical disorders. Goitre was extremely common due to iodine deficiency.


The second film is Tierra sin pan , Land without bread, a documentary made by Buñuel in 1933. Obviously not much has changed since the royal visit of 1922.  It is haunting work with its strange images of goats crashing down a ravine and a donkey being covered in honey by fallen hives and stung to death by thousands of bees, the corpse of a baby being transported over rough terrain and a river to bury it in the nearest graveyard;mentally afflicted boys leering into the camera as they jabber unintelligibly; a seemingly old woman with a goitre, breast feeding a baby, in fact the woman is only in her 30s ; frightening and disturbing images from the master of surrealism.
But look more carefully, Tierra sin pan is a film which breaks down the distinction between fiction and documentary. Many commentators have said that the voice-over narration and the particular subjects Buñuel chose to depict simply parody the documentary genre. However, at this point in the history of cinema the documentary mode was in its infancy. Robert Flaherty’s Nanook of the North: a story of life and love in the arctic (1922) was probably the most well-known film from this genre and there weren’t many others out there. The documentary as a genre didn’t have a fixed set of syntactic conventions that would have been available for film makers like Buñuel and his contemporaries to take as raw material for a parody. Like the grandmaster of contemporary cinema, Abbas Kiarostami, Buñuel does not believe in any fixed boundary between fiction and non-fiction film making.

However, one argument that Buñuel was parodying the documentary mode is the droll and sardonic voice-over juxtaposed with the terrible images on the screen. Actually the original film was completely silent. Bunuel provided the narration live during screenings. Abel Jacquin was hired to read the French voice-over in 1935 which was cut into the film along with sections of Johannes Brahms’ Symphony No. 4.

The voice-over is detached and uninterested, casually remarking on disease and death but it is not a mere parody, Buñuel subverts the documentary, it becomes a propaganda film. Several sequences in the film were staged for effect, the falling goat and the bee stung donkey. Bunuel anticipated many future experiments with the documentary mode that wouldn’t come for another thirty years in the history of cinema, he transgressed the fiction/documentary boundary to indite both the Catholic church and the Spanish for allowing a place like Las Hurdes to exist, a real hell on earth.

This film was banned upon it’s release. Buñuel would go on to produce films for the Spanish Republics film industry: Don Quintin el Amargo, La Hija de Juan Simon, Quien Me Quieri A Mi? and Centinela Alerta. In 1937 he produced a Civil War documentary called Madrid 1936 (or Espana Leal en Armas) but he did not consider these as part of his artistic ouvre.


You may also wish to see this, it's an animated film of the making of Tierra sin pan 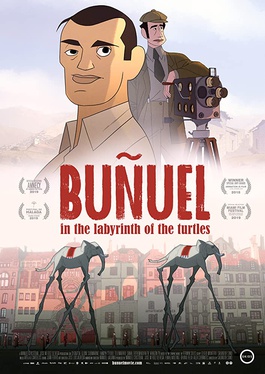 And finally, a little video about Las Hurdes today